Tracie Nicole Thoms is an American television, film, and stage actress. Thoms has appeared in several movies, most notably in the film adaptation of the Broadway musical Rent in which she plays Joanne Jefferson, lawyer and lover of Maureen Johnson (Idina Menzel). She took over the role from Fredi Walker, who played Joanne in the original Broadway production of RENT, but decided not to reprise her role due to her age. On July 18, 2008, she joined the final cast of Rent starting July 26, 2008, reprising the character of Joanne, replacing Merle Dandridge. The final performance was made into a DVD: RENT: Filmed Live on Broadway. Thoms reprised her role as Joanne for another production of RENT, directed by Neil Patrick Harris, at the Hollywood Bowl from August 6–8, 2010 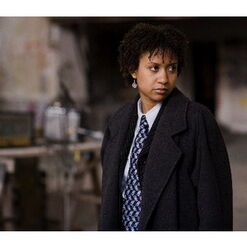 Tracie Thoms as Joanne in the 2005 Film adaption of Rent 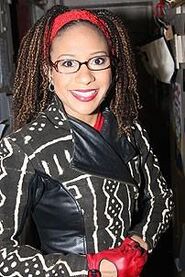 Tracie Thoms as Joanne in the 2008 Final Performance or Rent

Tracie Thoms as Joanne in the Hollywood Bowl performance of Rent
Community content is available under CC-BY-SA unless otherwise noted.
Advertisement